Warning: count(): Parameter must be an array or an object that implements Countable in /home/customer/www/zelentech.co/public_html/site/assets/cache/FileCompiler/site/templates/blog-template-prepare-content.inc on line 69
 Recycling of Military Hydraulic Fluid | ZelenTech
Worldwide: (+65) 9648 5210
US: (+1) (985) 876-8147
Email: sales@zelentech.co 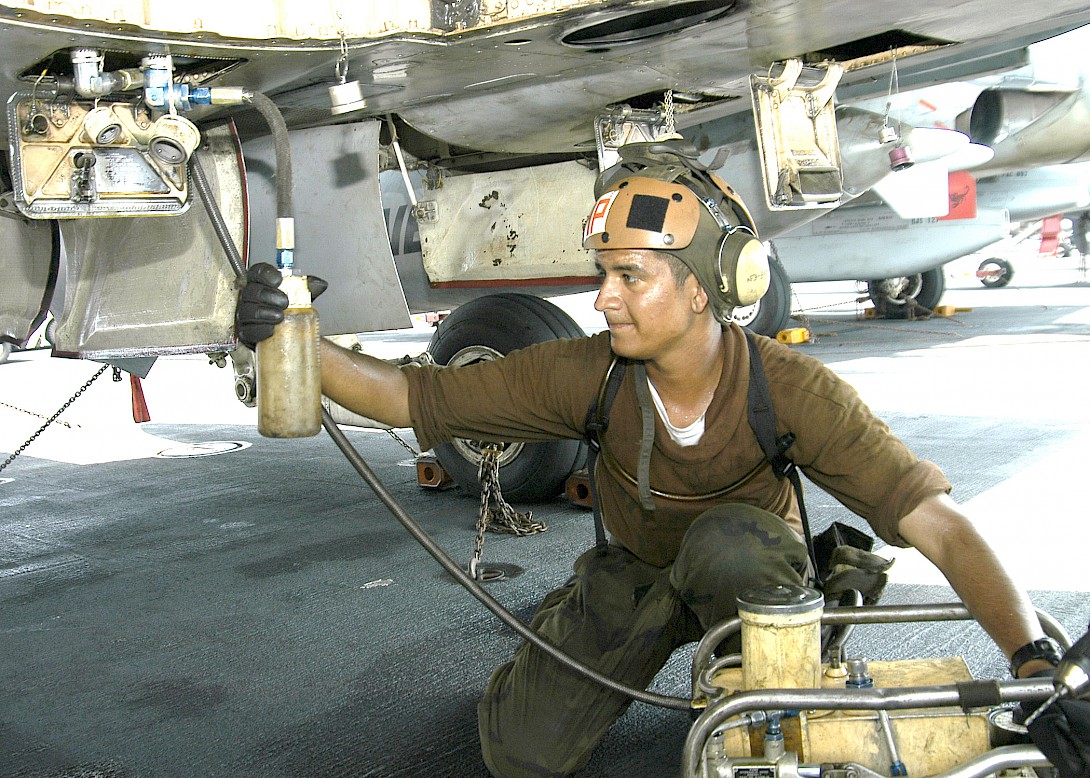 The U.S. Army, in cooperation with industry, recently developed and demonstrated a methodology for returning used hydraulic fluid to vehicle service. The effort was conducted in three phases: First, a laboratory investigation to determine the viability of restoring used fluid to military performance specification. Second, a field investigation designed to identify commercially available equipment that could successfully process the used fluid and also demonstrate the performance of the restored fluid in military vehicles. Third, the Army entered into Cooperative Research & Development Agreements (CRADA’s) with commercial companies that manufacture the certified hydraulic oil recyclers to test on-line diagnostics aimed at automating and optimizing the process.

Under the aegis of the aforementioned CRADA, industry developed technology that automates the process of restoring used fluid to "like new" condition. Testing and demonstration results indicate that the process of restoring used hydraulic fluid can be automated to require less labor and ensure complete restoration. This paper briefly explains the recommended process developed by the Fuels and Lubricants Team (formerly at Ft. Belvoir, now at U.S. Army Tank-automotive and Armaments Command, Warren, MI.) and presented in the "User’s Guide For Recycling Military Hydraulic Fluid". Recent military hydraulic recycling programs, studies, and field demonstrations are discussed. The U.S. Army Environmental Center is supporting technology transfer by collecting important cost and performance information and hosting field demonstrations to potential users.

The on-site recycling of hydraulic fluid with a certified hydraulic oil recycler can have a significant impact on meeting pollution prevention goals. The benefits include reduced fluid disposal costs, reduced procurement costs for new fluid, and an uncomplicated avenue for conservation of natural resources. The implementation of hydraulic oil recycling throughout the U.S. military services will likely save millions of dollars per year.

The approved methodology of recycling hydraulic fluids, developed jointly by the Army and industry, involves the removing of contaminants from the fluids and revitalizing fluid additives. Field investigations have shown that the most common reason for used hydraulic fluid being drained from vehicles and discarded is because it has become contaminated to such a degree that damage to the hydraulic system could result. Laboratory studies have determined that even though the hydraulic fluid may be heavily contaminated, its ability to perform has not been lessened. Analysis during the laboratory phase of this effort revealed that used MIL-H-46170 fluid (FRH) retained nearly all of its required performance capabilities, i.e. viscosity, corrosion protection, etc. The used fluid exhibited satisfactory performance in all but low temperature stability, water content, foaming characteristics, fire point, particle count, and evaporation loss. By removing the contaminants, laboratory studies have shown that the fluid properties can be restored to as good or better than MIL-specification requirements, except for the foaming characteristics.

Water can prove to be a very damaging contaminant in a hydraulic system. The presence of water can lead to decreased lubricity, viscosity, load-carrying ability, and dynamic film thickness; as well as cause acid formation. Free water in hydraulic systems that experience low temperatures (below the freezing point of water) can degrade system performance and cause malfunctions due to formation of ice crystals. Water contamination can be removed from used hydraulic fluid to prevent these actions and return the hydraulic fluid to specification performance levels.

During the laboratory testing phase, one concern was the occasional foaming of used hydraulic fluid. This can be attributed to the depletion of anti-foaming additives over long term use. It is this loss of foaming resistance in the fluid that prevents simple removal of contaminants from being the only treatment required to restore the used fluid to like new condition. In order to restore the used fluid to service, additional anti-foaming additive is required. Virgin hydraulic fluid contains less than 0.1% anti-foaming agent. Trying to blend very small amounts of additional additives into the used fluid outside a laboratory or manufacturing facility is not a viable technique for the soldier. Thus another solution was required in order to reuse waste hydraulic fluid. The Fuels and Lubricants Technology Team determined that the addition of new hydraulic fluid in the appropriate amount was sufficient to restore decontaminated, used fluid to specification performance. After an investigation into the optimum amount of new fluid to mix with used fluid, a mixture of 25% new fluid with used fluid freed of water and particulate contaminants exhibited satisfactory performance.

The second phase of the hydraulic oil recycling effort involved identifying and/or developing commercial technology that would satisfactorily remove the contaminants from the military hydraulic fluid, without altering the physical and chemical properties of the reconditioned fluid. While a variety of technologies exist to clean up used oils in the commercial world, the Army’s investigation revealed that not all of the technologies are appropriate to clean up military hydraulic fluid. MIL-H-46170 fluid in particular, poses an extra challenge in the removal of excess water. The fluid is formulated with an organic ester additive that has a strong propensity to absorb water. Commercially available fluid purifiers that depended strictly on special absorbent filters and/or coalescers typically were unsuccessful in removing the water from used military hydraulic fluid. In addition, the use of high heat may cause fluid oxidation, coking, or charring; high vacuum may strip the fluid of light ends, changing its viscosity; and desiccants may strip out fluid additives and add hard particulate contamination. These processes need to be avoided to maintain the physical and chemical properties of the fluid being recycled.

The Fuels and Lubricants Technologies Team entered into Cooperative Research and Development Agreements (CRADAs) with various companies to develop different processing units utilizing different technologies that were capable of removing water and particulate contaminants from the fluid at different throughput capacities. Once commercial units were identified and/or developed that successfully cleaned-up the used fluid during laboratory testing, they were employed in a six month field demonstration to assess both the performance of the processing units themselves as well as monitor the performance of the hydraulic systems on the vehicles using the restored fluid. The results of the field demonstration highlighted the need to explore means of automating the process of recycling hydraulic fluid.

The field demonstration validated what had already been proven in the laboratory: used military hydraulic fluid can be processed such that it is restored to like new condition and successfully used in military vehicles. Experience with the recycling units, however, revealed that the process of recycling used fluid was somewhat cumbersome. The units available for use in the demonstration had no means of determining when the used fluid had been sufficiently processed to remove the water and particulate contaminants to below the Mil-spec. levels. The only means available for determining when used fluid had been sufficiently processed was to collect and analyze samples for water content and particle count or to simply process the fluid for an extended period of time to ensure all contaminants were removed.

The method of determining the end point of the reconditioning process by collecting samples for analysis by a laboratory is both time consuming and labor intensive. In addition, if samples are collected too soon, the used fluid has to be processed an additional amount of time and samples collected and analyzed all over again. This increases the amount of time to the process particularly if there is no supporting laboratory on the installation and the samples have to be shipped to an off site laboratory. This extra time is accompanied by the cost of labor to perform the sampling and analysis.

The method of processing the used fluid for an extended period of time, although less costly than sampling and analysis, poses additional risks. Because the processed fluid is not analyzed for water content and particle count, there is no means of determining when the fluid has been cleaned sufficiently. To overcome this uncertainty, the fluid must be processed for an extended period of time, even though it is likely that the fluid is cleaned long before the time has elapsed. Much of the used fluid processed during the field demonstration was adequately cleaned in less than three hours, but a significant margin of error must be built into the processing time unless on-line diagnostics are available.

The solution is to automate the certified processing units such that the recycling units perform in-line analysis and a "go/no-go" indication is given to the operator. Two of the vendors that participated in the field demonstration phase entered into CRADAs with the Fuels and Lubricants Technology Team to accomplish in-line fluid condition monitoring on a recycling unit. The challenge was to incorporate affordable technology into the processing unit without impeding processing unit performance.